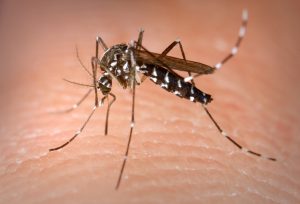 The Virginia Department of Health has reported that the Asian Tiger Mosquito is the type of mosquito that causes the most bites in the state of Virginia. This mosquito originated in Asia, but has spread to many other countries. It is a mosquito that tends to live where humans are instead of marshy areas, which may be one of the reasons why so many people are bitten by this type of mosquito.

The Asian Tiger mosquito is striped and looks similar to a tiger. It is dark with white stripes. Although it can be difficult to identify a mosquito when it is biting you, if you capture the mosquito and examine it closely you will be able to identify it.

Where Does the Asian Tiger Mosquito Breed?

This species of mosquito can breed in just one tablespoon of water. It is different from other mosquitoes because it is considered a container breeder. It will not breed if there is soil found in the water. Instead it looks for containers that contain water like old jugs or buckets. It may breed in a rock pool or a hole that is in a large rock.

What Diseases Does the Asian Tiger Mosquito Carry?

This mosquito carries West Nile virus, Eastern equine encephalitis and La Crosse encephalitis in the Virginia area. However, it is also a known carrier of dengue fever, yellow fever and chikungunya. If these viruses spread to the United States, this mosquito can spread it rapidly because of the way it hunts.

How Does the Asian Tiger Mosquito Behave?

The mosquito tends to rest in foliage and then hunt when a victim comes close to them. They do not spend a lot of time in flight, but spend their time in shady, cool areas. The mosquitoes are active all day long, and so you may be bitten at any time during the day, while other mosquitoes tend to be more active at dawn and at dusk. A mosquito control program may be effective for your yard since it will treat the foliage in your yard where this type of mosquito likes to spend most of its time.

When trying to protect yourself from being bitten by the Asian Tiger mosquito, the CDC recommends you use a mosquito repellent with DEET. Although it’s best to have a professional mosquito control company eliminate the area surrounding your home, using a repellent will add a second layer of protection against being bitten.