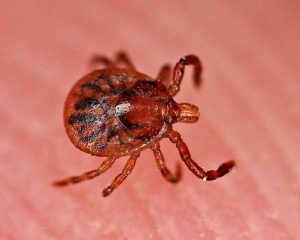 Ticks are carriers of a number of diseases throughout the United States. However, ticks have different habitats and each carry different diseases. When you find a tick on you, it can be helpful to identify the type of tick, so that you can be aware of any symptoms you may develop. This can help you seek medical treatment much sooner. In Virginia, there are three types of ticks that carry diseases.

The blacklegged tick looks different at the different stages. As adults, the females have a reddish body with a black head and legs. The adult male is almost entirely brown with a lighter ring around the edge of its shell. The nymph is a light brown color. The nymph is actually the stage where it spreads the most disease.  Blacklegged Ticks will spread anaplasmosis, babesiosis and Lyme disease.

The lone star tick is a unique tick. The nymphs are a light brown color and more difficult to identify. The males have a patterned back, while the females have a single white dot in its back.  The nymph and adult female will spread disease. The lone star tick carries ehrlichiosis and tularemia. Additionally, there have been cases where people develop an allergy to meat after a tick bite.

Many tick related illnesses have similar symptoms when they start. Most will start with a fever and a headache. There may be nausea and vomiting. Often a rash will develop which will help the doctor determine the they of disease. Lyme disease has a distinctive bull eye’s rash. Rocky Mountain spotted fever has a spotted rash that starts on the wrists and ankles. Ehrlichiosis will also have a rash. If you catch babesiosis you may jaundice. If you notice any of these symptoms after a tick bite, you should seek medical care.

Find out the 5 Ways Fleas Can Make People Sick and what you can do to prevent it from happening to you and your family. 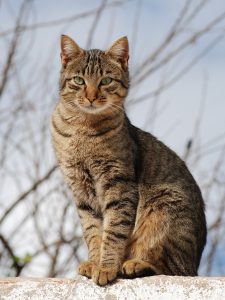 Fleas can quickly make your cat miserable. It is easy for a cat to pick up fleas while out roaming the neighborhood or when interacting with other cats. It is important to act quickly if you suspect your cat may have fleas. This can stop one or two fleas from turning into an infestation.

The best way to check if your cat has fleas is to look closely to see if you can see small insects in the fur. You can also use a metal flea comb that will catch any fleas. Dip the comb into warm soapy water after each stroke to kill any fleas that it catches.

You will need to treat your animal for fleas if you find them. The best way to do this is through a treatment that will work against all stages of fleas. There are topical treatments where you apply an oil to their back or you can give them an oral medicine that will stop the fleas. This will stop the fleas in their tracks. You may also want to try a powder or shampoo to immediately kill all of the adult fleas on your pet. However, these will only provide a temporary solution. It is best to use a preventative measure each month to stop this from happening again. You can ask your vet for a recommendation or buy an over-the-counter option like a flea collar.

Fleas spread quickly and they will not just stay on your pet. If your cat has fleas, there is a good chance that fleas are lurking somewhere else in your home and they may be waiting to hop onto you for their next meal. You can begin by washing all of your bedding, and vacuuming thoroughly. This is often not enough and you need to consider treating your entire home for fleas. A professional exterminator can help you quickly eliminate the fleas in your home with a treatment. You can also help to prevent fleas by treating your yard for fleas. Contact Mosquito Tek to learn more about exterminating fleas in and around your home or business. 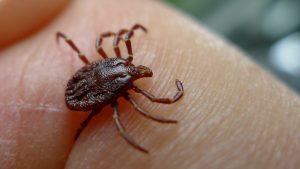 Ticks have a bad reputation for a good reason. These small parasitic pets will attach themselves to a host and feed for up to 48 hours at a time. When attaching with the host, the saliva from the tick will mix with the blood of the host and this is how the disease is spread. Ticks can be difficult to spot and make it hard to prevent the transmission of disease. Here are some diseases that ticks can transmit.

Lyme disease is a serious condition that is prevalent throughout the United States. It is spread by the blacklegged tick. Lyme disease can be treated with a round of antibiotics. Catching and diagnosing Lyme disease early can help prevent the more serious symptoms from developing. If it takes years to diagnose the disease, it may take much longer to recover and some people’s health may never fully recover.

Tularemia is a rare disease. There are other forms of it but you will not catch them from a tick bite. Antibiotics are effective at treating the disease. If you think that you have contracted tularemia or develop an open sore where you were bitten, you should seek medical attention.

Rocky Mountain spotted fever is spread by the brown dog tick. It is prevalent throughout the United States. The rash may develop later, which can make Rocky Mountain spotted fever difficult to diagnose. Catching the disease early is essential to prevent further complications. The disease can be treated with antibiotics. If not treated early, it can lead to death. Some severe cases may require amputation of limbs due to damage of the blood vessels.

If you are worried about your family possibly being bitten by a tick, you can treat your yard. The technicians at Mosquito Tek can apply a barrier spray that will eliminate ticks in your yard and stop new ones from coming.